It's Your World, I'm Just Living In It

Just What I Thought – I’m Invincible! Are You?

Yes. I am invincible. That’s right! No one can see me!

Just kidding, I know there’s a difference. Seriously though, I’m invincible. Just ask MSNBC.  This is according to an article they published yesterday, on something called Vitals.

Isn’t that just amazing? By drinking coffee, you reduce your risk of death! I mean just think about all of the ways people have tried to avoid dying – magic potions, age fighting creams and chemicals, Benjamin Button-ing yourself. All this time, all they really needed to do was drink coffee! That’s just kray.

Let’s be honest here, who wouldn’t want to reduce their risk of death? Up until this point, your risk of death was 100%. Now with coffee, who knows what it is. 50%? 5%? The possibilities are endless…depending on how many decimal points you use. Most normal studies only try to prove that a lifestyle change can increase life longevity or decrease risk of dying from a particular cause. But not at MSNBC. No way. They find out what’s going to keep us alive forever and that’s why they are now my 16th favorite website starting with “www.M” 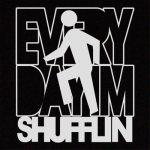 As a marketing/social media professional, I look at some of these new communications platforms and see some great opportunities. Red Bull ran an awesome contest featuring the new timeline format of the Facebook pages. Jell-O ran a crazy promotion on Twitter which actually gaged the overall happiness level of the Twittersphere. The opportunities for businesses are endless and seeing these new innovations is one of the best things about being in social media.

That being said, I think it’s time we fix Twitter. It has become the place where a person’s every thought is listed out for the world to see. Before Twitter, if you were watching Chris Brown present at the Grammy’s and wanted to make a joke about letting him hit you, you’d just think it, or say it to your friends in the room.

END_OF_DOCUMENT_TOKEN_TO_BE_REPLACED

It’s that time again, here is your Friday Top 5. And yes, once again it is about people that everyone hates. I’m starting to see a pattern emerging here. Anyway, I know you’re all with me on this one. There are certain things some people do that just fill you with a white hot ball of rage when you’re driving, and these are them.

5.  I Use My Blinker While Merging

END_OF_DOCUMENT_TOKEN_TO_BE_REPLACED

The Definition of Adding Insult to Injury

Sometimes in this world, you see things and just have to wonder what someone was thinking when they created it. I was driving down the street and saw a guy using a product that inspired that exact thought. What were you thinking, Dr. Medical Scientist? 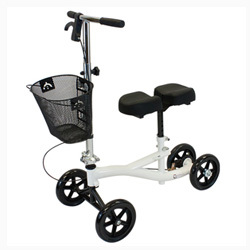 END_OF_DOCUMENT_TOKEN_TO_BE_REPLACED

This is the first installment of the Friday Top 5 series. Enjoy!

Oh Facebook, how you have changed the world. Facebook has changed more than just the world though, it has also changed the definition of friend.  According to Facebook, the word friend is now defined as “anyone you have ever met before…ever.”  This is the main reason that it is so easy/fun to defriend people.  Now, I don’t usually defriend people on a whim.  It almost always comes after several major Facebook infractions have been made.  Here’s my Top 5 reasons I’m going to defriend you.

5. Be someone I never cared about and never will.

Now to be honest, this isn’t the persons fault per say. I may have friended him/her on a whim or he/she may have friended me because we went to high school together.  No matter how it happened, its clear we’re not friends nor will we ever be so go away!  This also carries over to friend requests.  If you’re requesting me just because we went to school together, that sheesh ain’t gonna fly. We’re not friends, let’s not pretend we are. Instead, let’s just call it what it is. We’re acquaintances at most! So, until Facebook allows you to Acquaintance someone, just leave me alone.

Now here’s when we get into it being your fault.

4. Give me life lessons in your status updates.

Just stop. Stop trying to make it seem like you’re wise. Stop pretending that people read your status and think, “Yup, she really nailed it. I think I’ll turn my life around today. Thanks random person I met once at a party 6 years ago.”

Everyone has one person like this. No matter what you post – a picture, link, video, status update, change your marital status, new friend, etc. – they Like it.  You know what’s ironic here, I DON’T LIKE THAT YOU DO THAT. I mean, how creepy can you get. Can you imagine if I just followed you around every day and whenever you did anything, I said, “Hey man, I like that!” Not only that, but you cheapen the Like button every time you do that. There’s no way that you can Like everything I do, it’s impossible. Unless you are simply impressed that I learned how to update my status or that I didn’t forget how to change my profile pic. Maybe I’m just impressing you with my infinite knowledge of the book. Either way, back off!

2. Invite Me To Apps I Will Never Care About

Mob wars? Really? Is it still 2003. High School Year Book app? What the hell do you think Facebook is!? Just stop it! How could you possibly think that I’d be interested in this. Here’s a rule of thumb for inviting friends to apps.

If, and only if, you add an app and use it every day for a month and still enjoy it, then you can invite me.

Because odds are, you’ll be tired of that app before I even have a chance to respond to your request.  The fact that you think I’d enjoy this shows just how little you know me and is 100% proof we shouldn’t be friends in real life or in fake life.

And the number 1 way to get defriended on Facebook?

It can’t be any more straight forward than that. Kissy face in the mirror in your bikini? Defriended. Rippling abs with your shirt pulled up half way in the mirror? Defriended. I don’t remember, is this the JerseyShoreBook or Facebook? NO ONE CARES. No one is really saying “daayyyaammmmm” when they see your pasty body all over their news feeds. They’re saying “Really, random girl I went to middle school with who now lives in Brockton and is a server at Friendly’s, you thought that was a good idea?” As for the guys, it may be a little jealousy but that’s neither here nor there. Either way, put your mega deep v back on all the way, and go get your jager bomb on.

If you’re reading this, and you have been defriended by me in the past, I hope you understand now why I did it. That’s all for today’s Friday Top 5. Don’t forget to signup and get these posts in your email.

I have so much to say about mustaches, I don’t even know if I can get it all out in one post but I’m going to try.  Mustaches are nothing new.  Everyone has seen some great ones and some terrible ones in their lives.  I’ve learned a lot about them in my 26 years on Earth and I’ve come to a pretty obvious conclusion.

If you have a mustache and you are under 40 years old, you look RIDICULOUS.

Here are my 3 exceptions to having a mustache before 40.

1. It’s Movember. Reason being, you’re not doing it to have a mustache. You’re doing it to support a worthy cause and I’m down with that.

So, I’ve explained all of the exceptions to the 11th commandment.  Do you have any questions? If so, I have a created a flowchart for you to clear up any confusion. 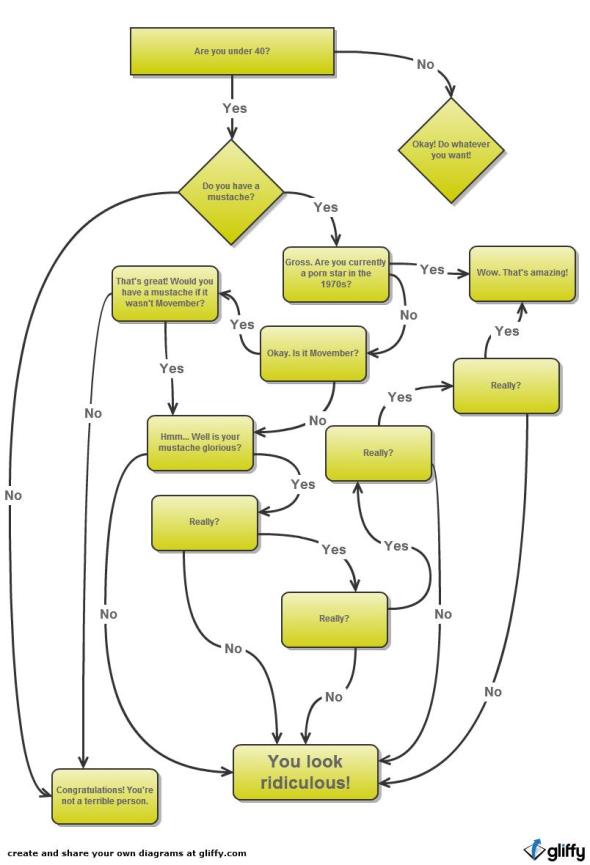 I’m sure this flowchart has cleared up any questions that you may have had. While writing this post, I decided I am going to spread this issue out over two posts because there is just so much to say about mustaches under forty.

If you have a mustache and you are under 40 AND you believe you don’t look ridiculous, I’d love to hear your reasoning in the comment section. Keep in mind, no matter what you say, you are wrong.